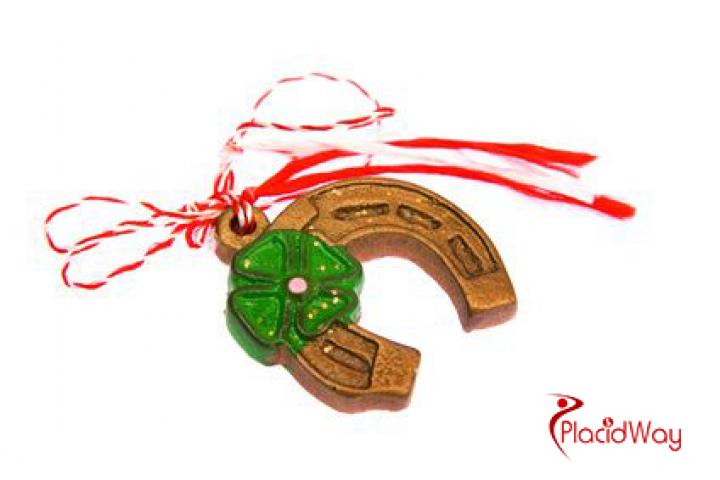 Martisor is a 8000-year old Romanian holiday and one of the country’s most representative tradition.

Martisor (Mărțișor) symbolizes the end of winter and the coming of spring,  and is symbolically correlated to women, life and fertility. Back in the days, according to the old calendar, March 1 was celebrated as the beginning of the new year.

The word Martisor is the diminutive of March and could be translated ‘little March’. On March 1 men offer girls and women a red and white string with a small talisman attached to it. The Martisor brings good luck and joy, and the one who wears it will be healthy and strong for the year to come. The red string symbolizes the winter, while the white one spring, and  the little talisman or token is usually a symbol of good luck: four-leafed clove,  heart, horseshoe or a chimney sweeper. Girls and women have to wear the Martisor on outer garments until the threes would bloom and then hang it on a three branch for good luck.

In the old times, in the countryside, people also used to hang a red and white string at the windows, the gate or the cattle’s horn to bring protection from evil spirits and to invoke the nature’s regenerative power.

It is not clear whether this is a Roman or Dacian celebration, but according to archeological research both tribes celebrated the New Year on March 1. For the Romans, Mars was the god of war, but also of agriculture and rebirth of vegetation. Therefore, red and white also symbolize war and peace, victory and purification. Back then women wore the Martisor  as a necklace made of red and white river pebbles. When the first trees were flowering, women hanged the Martisor on their branches.

Another tradition says that the red and white string has attached to it a silver or gold coin and after wearing it for 12 days, women used to buy with it fresh cheese so that their skin would be beautiful and healthy the entire year.

Although today the Martisor has become a symbol of love, friendship, respect and love, women still believe that wearing a red and white string around their wrist will bring them good luck and happiness.